This post is going to be a little scattered. I have a couple things on my mind and I want to talk about both of them. To be fair, the subject of each idea is linked closely together. 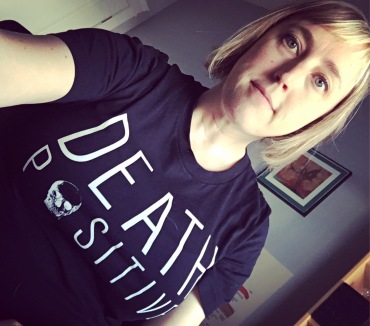 First, on Twitter, I follow Caitlin Doughty, mortician, activist and founder of the death acceptance collective The Order of the Good Death. I made a pledge to The Order of the Good Death a few years ago. I quietly advocate for a death positive existence, but I don’t push the topic on people. It means a lot of different things to different people. My main goal in life is to somehow “normalize” death for myself and to be able to talk about it in meaningful ways in my writing and to others. Some people are more receptive to it in conversation than others. I’m not a doom and gloom type of person, I can be serious, but overall I hope to figure out a way to deal with the overwhelming emotions that come with it, a practical response to an inevitable certainty. Granted, I fully believe that any reaction is appropriate to the death of a loved one. Emotions can’t be controlled, nor should they be. Doughty makes these conversations funny and serious at the same time. If you are interested, Doughty recently posted her 7 Habits of Highly Effective Death Positive People on YouTube.

Now, there are many different ways in which the inevitable happens so it’s not about the actual event, but more about preparations before it happens. One way to do that is to make sure you have an Advanced Directive. Doughty has a Youtube series that talks about all kinds of things, but this is just one of many that are super important if you can wrap your mind around the inevitable. I will admit that I still need to get this done. I’m planning to sit down with my husband, make a living will and create advanced directives for both of us. I’m giving myself a deadline of two weeks from today. I’ll check in with you on the blog and let you know. It isn’t an easy thing to make yourself create. I get that.

Now to switch it up to a different but related event . . .

The second part of this post is about saying goodbye to a fantastic and well-known Portland-beloved writer. I was fortunate enough to attend the Literary Arts tribute to Ursula K. LeGuin a couple days ago. I was late to reading Ursula, but she sparked my interest again at an event about eight years ago. It was another Literary arts gathering called in conversation with Margaret Atwood and Ursula K. LeGuin (thank you to Gina for giving me your extra ticket!). I’d long admired Atwood and that night I was struck by the vitality and wit LeGuin exuded from the stage. I’d only read short pieces by her. Soon after, I read The Left Hand of Darkness and then a friend gifted me her book, The Dispossessed. Both are fantastic. I also read a few books in her EarthSea series. Anyway, her willingness to be part of the literary community not only by participating in it but in supporting other writers gives me a lot of hope. Yes, we are living in scary times, but LeGuin has given us many guidelines on how to move forward through social justice and speaking out in whatever voice you call yours. I remain optimistic.

Drop me a line or comment below. What are your thoughts on death, Ursula LeGuin, or anything else?